Lay eyes on Cartagena and prepare to be lovestruck.
A major trading port in the days of the Empire, Cartagena is Colombia’s most picturesque,
well-preserved colonial city.
Its historic centre is enclosed by 11km of fortified stone walls, built to guard against
marauding pirates. Beyond the walls is an enchanting city of cobblestone streets, brightly
coloured mansions and elaborate cathedrals overlooking parks and plazas.
Literature buffs will know the setting for Gabriel Garcia Marquez’s romantic epic Love in the
Time of Cholera was almost certainly based on Cartagena, inspired by its state of decaying
charm in the late 19 th century.
Today, Old Cartagena is no longer the crumbling sailor’s outpost of Garcia Marquez’s
imagination. As Colombia’s premier tourist destination, the city has undergone an extensive
makeover. Grand homes and historic landmarks have been authentically restored. Cafes,
museums and artisan craft stores have proliferated. Even the old horse-drawn carriages
have returned, if only for the entertainment of sightseeing tourists.
Sure, Cartagena is touristy and the Old City somewhat sanitised, but romance is part of the
city’s DNA. There’s fiery passion in the Caribbean style salsa danced in the clubs and on the
streets. Couples sit hand in hand atop the city walls watching the evening sun glow red over
the Caribbean Sea. This is a city whose beauty has inspired countless poets, painters,
musicians and lovers.
So, visit Cartagena and follow your heart – and our guide on what to do in Colombia’s most
romantic city!

WANDER IN THE WALLED CITY 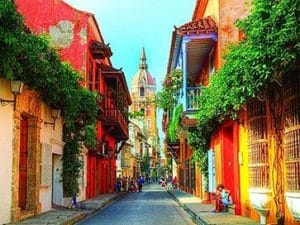 A contender for the most photogenic city in South America, Old Cartagena’s narrow streets are a living architectural museum. Around every corner is a piece of history – a humble stone church, a lavish cathedral, or a gothic-style bell tower. Buildings sport vibrant Colonial pastel façades and baroque wooden doors. Consider a walking tour with a guide who can fill you in on the fascinating events and personalities that shaped Cartagena’s identity.

CHILL OUT IN GETSEMANI 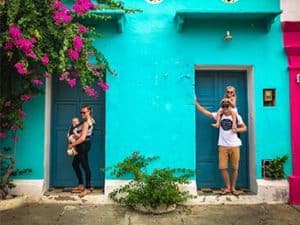 Just outside the city walls, Getsemani was a fairly notorious neighbourhood that’s experienced a recent renaissance. The scruffy backpacker hostels and shady bars are still there, but the barrio has embraced a hip, artistic vibe in contrast to Old Cartagena’s meticulous aesthetics. Neglected buildings have been revamped, street art is ubiquitous and boutique hotels and funky bars are popping up everywhere.

Getsemani is changing fast, but for now, it still manages to balance ramshackle quirkiness and cosmopolitan cool. Check it out before the rest of the world gets wind of it! 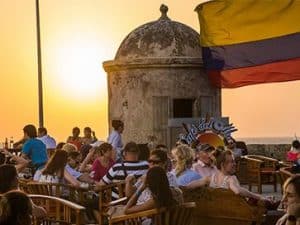 The western ramparts of Old Town face the Carribean Sea, creating a great sunset vantage point. A string of bars along the promenade (including the famous, and perpetually packed Café del Mar) provide the perfect opportunity to sip tropical fruit cocktails as the sun sinks below the ocean.

And what nightlife loving city would be complete without a rooftop bar or six? A newer addition is the slick Townhouse Rooftop, which provides a unique sunset perspective overlooking Cartagena’s rooftops and cathedral domes.

LOSE YOURSELF IN MUSIC 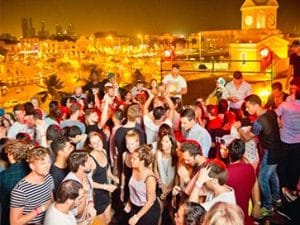 Yes, Cartagena has plenty of nightclubs, from traditional salsa joints to techno pumping party palaces. But there’s more to Cartagena’s nightlife than clubbing – it’s a paradise for music lovers of all persuasions.

The region has its own distinct musical stylings, blending Latin and Afro-Caribbean influences, and these can be heard in the city’s wealth of live music venues. Most play local genres like champeta and cumbia, while others cater to rock and jazz devotees. For live salsa, Café Havana is a well-loved classic, but often the best live music you’ll encounter is performed on the streets. Wherever you go in this soulful city, music is in the air.

ESCAPE TO A SECLUDED ISLAND 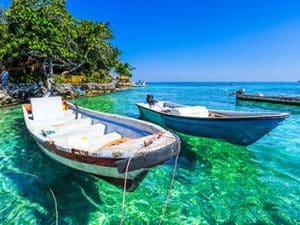 Cartagena doesn’t have mainland Colombia’s best beaches – you’ll have to go to Tayrona or the Pacific Coast for that. But Cartagena is still inextricably linked to the coast, and an island hopping cruise is high on most visitor’s agendas.

The Rosario Islands are 27 pretty coral islets scattered off Cartagena’s coast. Most day trips follow a standard itinerary, anchoring at the islands’ most famous (ie. crowded) beaches, combined with some rather unimpressive snorkelling. To get a better feel of Colombian island life, consider staying overnight. Isla Grande has several accommodation options along its idyllic white sand beaches. One of the few inhabited settlements in the Rosarios, a local indigenous population live in rustic villages, carved out of the island’s jungle interior. For a more luxurious (if less authentic) stay, the exclusive Hotel Coralina sits atop tiny, coral reef-fringed Isla Coralina, where guests relax in thatched roof bungalows and feast on top-notch food made with local Caribbean produce.

OVERLOAD YOUR SENSES AT MERCADO BAZURTO 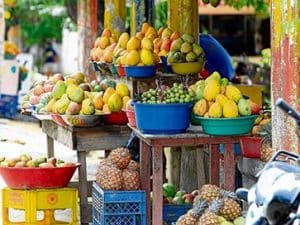 Cartagena isn’t all beauty and romance. Most tourists experience a completely different Cartagena to the one thousands of Costeños (Cartagena locals) live, work and raise their families in. Yet both fancy restaurants and working class Costeños come to the same place to buy fresh ingredients.

Mercado Bazurto is a gigantic, 24 hour indoor/outdoor market 15 minutes outside the walled city. It’s a raw slice of real life in Cartagena’s not-so-glamorous side. This is no tourist attraction. Bazurto is a gritty, grimy assault on the senses, pungent with the smells of recently slaughtered animals, their body parts dangling from iron hooks. Produce vendors sell a mind-boggling variety of fruits and flowers, while counterfeit dealers ply knock-off watches and underwear. It’s a confusing, chaotic warren of narrow passageways, prowling pickpockets, stifling heat and sweaty bodies.

It may look intimidating, but Bazurto is a cheerful place, a sort of social hub for locals. People take their families, snack on fresh food, drink cheap beer, and in true Costeño fashion, break out into the occasional impromptu jam session. What the rest of Cartagena lacks in romance, it makes up for in passion.

RENT A MOTORCYCLE IN COLOMBIA:

CEO & SALES - A Dane who has traveled overland in over 100 countries and finished the Intercontinental Rally from Spain to Dakar twice. An 8 month solo motorcycle trip brought him to Colombia. Mike was blown away by the country, its people and its many adventures. He found true love and is now married to Diana Puerto and the couple have three daughters.